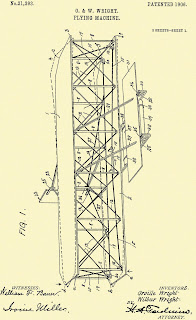 The Wright brothers, Orville and Wilbur, were two Americans who are generally credited with inventing and building the world's first successful airplane and making the first controlled, powered and sustained heavier-than-air human flight on December 17, 1903.


The brothers developed their flying machine into the first practical fixed-wing aircraft. Although not the first to build and fly experimental aircraft, the Wright brothers were the first to invent aircraft controls that made fixed-wing flight possible.


Orville Wright (1871 - 1948) and Wilbur Wright (1867 - 1912) requested a patent application for a "flying machine" nine months before their successful flight in December 1903. Their US patent claims the invention of a system of aerodynamic control that manipulates a flying machine's surfaces.


Patent Place USA has this patent, along with all of the other Wright Brothers patents.

You may need to deliver countless for your publicizing effort inside a brief span period.quality brochure

As our children grew up and moved out of our once noisy home, I realized that I needed something to fill the void before the 'empty nest' syndrome got the best of me.

Patent Place USA was born, and we have kept busy ever since. We love our customer stories of how they use our patent prints. Some give them as gifts, some use them to decorate an office or home, and some use them to add value to a collectible item. Whatever your reason is, we are happy to offer quality products, fast service, and great customer satisfaction.